Last Friday evening at St. Thomas Aquinas, close to 400 EPISO and Border Interfaith leaders celebrated a landmark event-- four decades of organizing in El Paso. But something they never anticipated also came to pass-- two weeks earlier, leaders representing EPISO and Border Interfaith were invited to join a delegation of 20 people from across their broader community organizing network, the West/Southwest Industrial Areas Foundation, to share with the Pope the courageous work of countless leaders to bring water, sewer, and drainage to the colonias in El Paso. To these stories, Pope Francis responded,

("Men and women like these are those who make history. They don't conform to limits. Surely they have been criticized a lot. But the people listen to the criticism, because they are humble, and they keep moving forward."

He sent his blessing and his medallion to each organization, and closed with encouragement to leaders to keep working, and to not rest on their laurels. 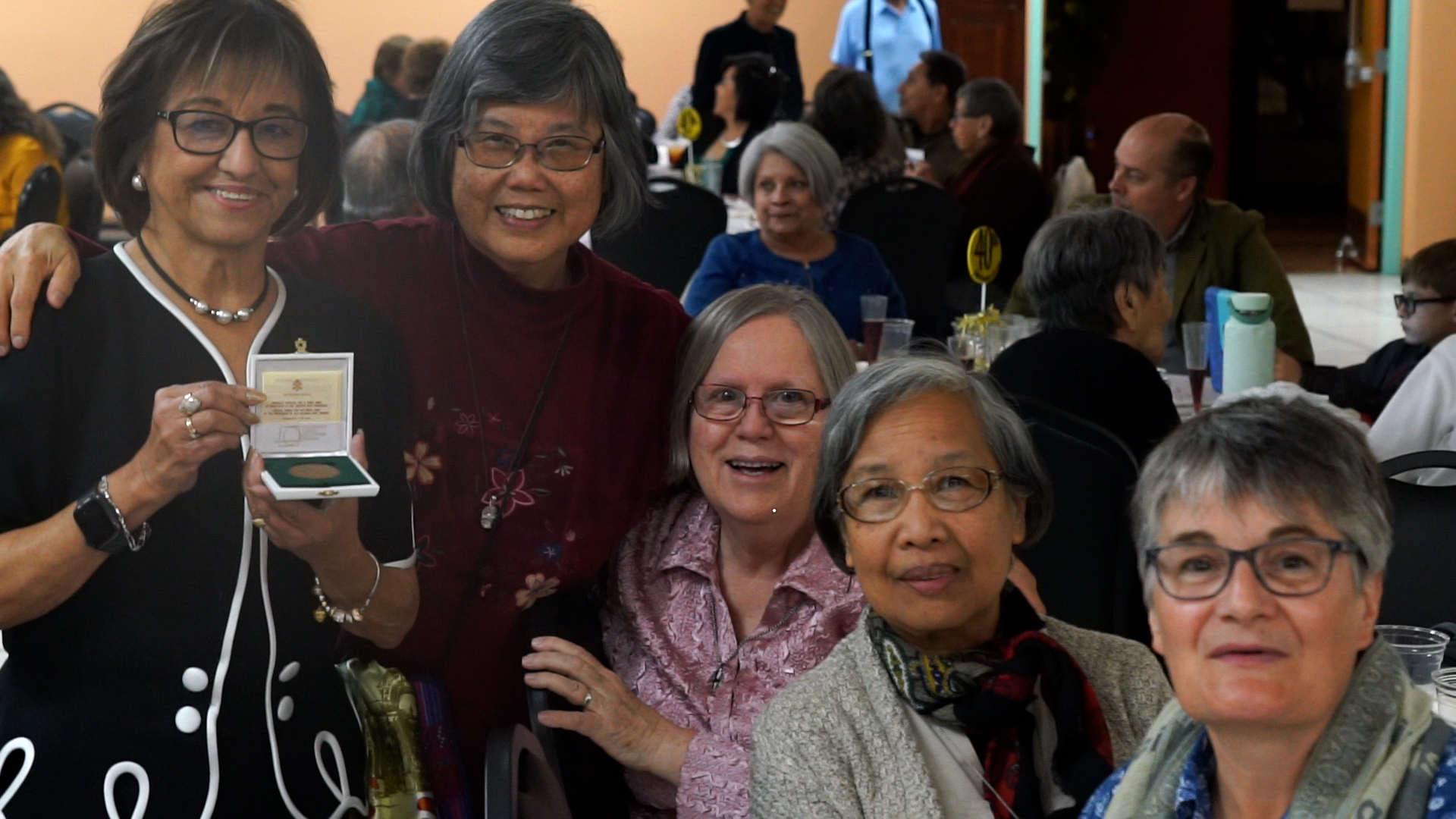 (Co-Chair Rosa Lujan shares the medallion with others at EPISO/BI's 40th Anniversary.)

And rest EPISO/BI leaders do not. At their 40th Anniversary celebration, they recognized the work of their founding leaders, the major accomplishments of the organizations, and charged forward with a vision for the work ahead. Bishop Mark Seitz delivered a keynote address congratulating EPISO/BI on their achievements, but also recognized leaders for listening to people on the peripheries, and for taking action.

Honorees included Sr. Elisa Rodriguez, Fr. James Hall, and Alicia Franco. Had it not been for their courage and persistence, there would never have been an organization with the power to bring water and sewer to 100,000 people on the border, or to start Project ARRIBA, a workforce development project with over 20 years of success in training people for in-demand occupations in healthcare and education.

But leaders acknowledged that the work is far from over. K. Denisse Garcia, a second generation EPISO/BI leader shared that after a harrowing recovery from COVID-19, she now has to work three jobs to support herself through El Paso Community College, and that many of her peers have fallen through the cracks. Amanda Ozer of University Presbyterian Church presented on the state of the economy, and the need to shore up efforts for workforce training and direct cash assistance for people living on the edge.

Judge Ricardo Samaniego reacted to EPISO/BI's proposals for action by committing to finding American Rescue Plan funds to invest in Project ARRIBA. "It's a no-brainer," the Judge quipped when asked if he would support the project. 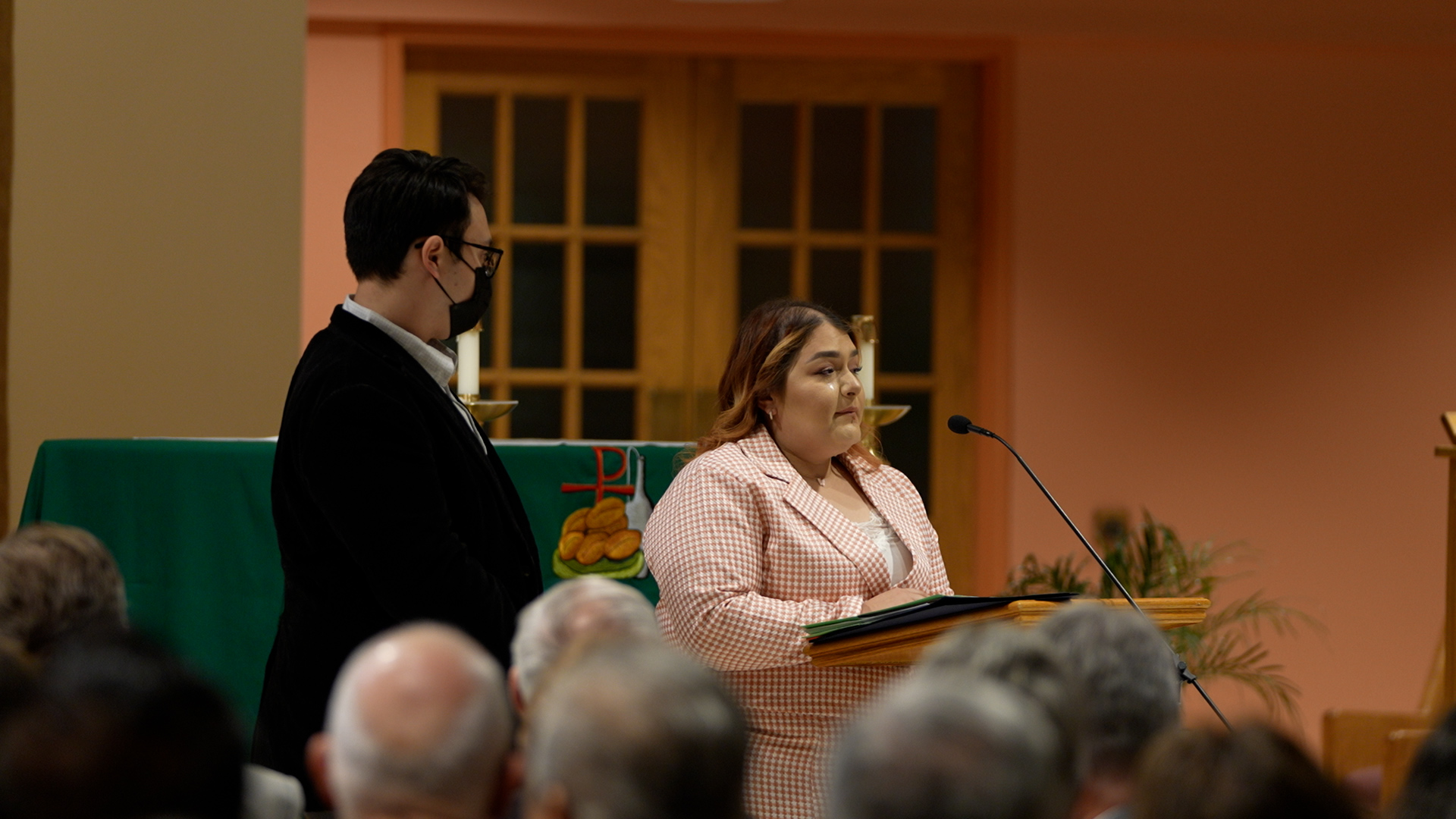 (K. Denisse Garcia and Ivan Bernal speak to the need for greater investment in the new workforce of El Paso.)

EPISO/BI is continuing a hard money campaign to raise funds for the organization until December 31, 2022. Missed the Anniversary but want to make an investment? You can now invest online at episo-iaf.org/invest.

InSeitz into the Faith, A Podcast with Bishop Mark Seitz on EPISO/BI's Papal Visit