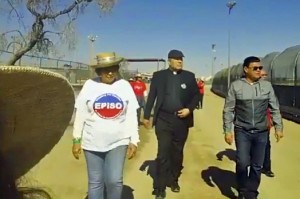 Invited as honored guests by Bishop Mark Seitz of the Diocese of El Paso, leaders of EPISO and Border Interfaith traveled to the US levee to celebrate mass with Pope Francis during his historic visit to Ciudad Juarez on the border. They were included in a “small contingency of the faithful” to greet him as he approached the river’s edge from Ciudad Juarez to deliver a special blessing and prayer for the safety and security of immigrants in their search for a better life.

Before departing to the levee, leaders joined US Catholic Bishops and Cardinals for a special gathering in which they reported local action around immigration, including work around the recent increased presence of State Troopers in El Paso County.

At last week’s EPISO / Border Interfaith accountability assembly, a leader told the El Paso County Sheriff about his experience of being pulled over and interrogated about his origin by a State Trooper, even though he was a US born citizen with a valid license. The Sheriff revealed that this wasn’t the first time he had heard of this happening and proposed a joint meeting with the Regional Director of State Troopers. EPISO and Border Interfaith leaders are securing this meeting as part of a larger statewide strategy to promote the dignity of both immigrants and citizens in Texas.